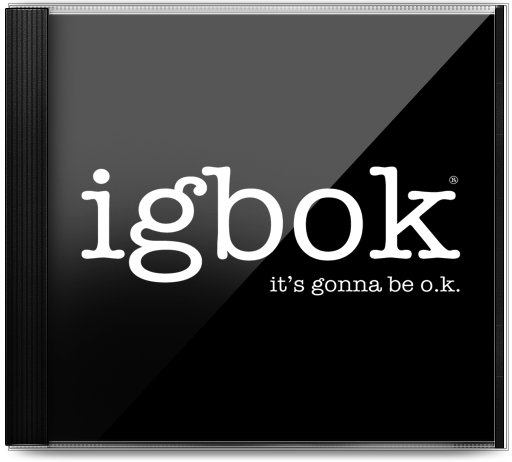 In 2010, renowned songwriter, Tom Douglas, was touched by igbok in a way that made him immediately put pen to paper and express the word through song.

I started seeing “igbok” everywhere – bumper stickers, t-shirts – was it a conspiracy? Some cult? Some new alt/country/new age jazz/rap band?

Then I met David Arms and saw his amazing creation of the painting “igbok“. The smoke cleared. The Red Sea parted. The code was broken: “it’s gonna be o.k.”…wow, Romans 8:28(a) – “And we know that in all things God works for the good of those who love Him.” It was an acronym for one of my favorite verses and one of the greatest truths in Scripture.

Hey man it sounds like a song…can I write a song? Voilà!

Tom is one of the finest when it comes to the craft of writing a song. He takes ordinary thoughts and experiences of the common man and weaves them into something extraordinary.

Tom won CMA’s 2010 “Song of the Year” for co-writing “The House That Built Me”. The song also received three nominations at the 53rd Grammy Awards including “Best Country Song” and overall, all-genre “Song of the Year”. It won the Grammy for “Best Female Country Vocal Performance”, giving Miranda Lambert her first Grammy win. Tom was also nominated for an Oscar at the 2011 Academy Awards in the Best Original Song category with “Coming Home” from the movie “Country Strong”, performed by Gwyneth Paltrow.

The Song
You can listen to the song on igbok.com or download it for $0.99.

So you spin the dial and you change the station,
It’s the time of your life you feel you’re wastin’,
You hear an echo from Genesis to Revelation
igbok baby, igbok baby.

The baby’s up all night and won’t stop cryin’,
And what you’re selling they ain’t buyin’.
You sit alone in a rocker and your memory’s frayed,
Heaven is a dream of finer days,
It’s gonna be o.k. It’s gonna be o.k.
igbok baby, igbok baby.

You won’t find it in your dictionary

Nope. You won’t find it in your dictionary. It’s less a word than an acronym.…

Just such a place

I smile looking at this picture of David and I standing with our “igbok” shirts.…

The Desert of Eden

When the plane took off it was 32 degrees and snow was on the ground.…